11:43am, Tuesday, Library 4th Floor. I was hungry. I closed the Word.doc and went to my favorite procrastination material, the Nudge. I could feel the PhD kid judging me. He could have screamed at me. I didn’t care. I was hungry. Clicked “Food”. Selected “Central London”. Scrolled down. ouuuuh, Ramen at Bone Daddies Ramen Bar! Looked a bit too-cool-to-be-authentic, but I was in a hipster-ish mood and needed a big portion to get me going through the day. Done.

Not sure what I did, but what was supposed to be a 15 minutes’ walk turned into an serious expedition. 12:47, I finally stepped into Bone Daddies. The place was surprisingly empty, still, charming [it packed up pretty quickly 10 minutes later. word must have spread that I showed up]. I waited to be seated next to a wall covered with replicas of old (1940s?) Japanese posters. The waitress sat me by the window. She wasn’t rude, neither was she kind. Just serving, with a cool attitude.

Having lived in Japan during four month, I thought I knew my stuff. I glanced over the menu quickly, picked the Dipping Ramen, flicked my hair. I never heard of dipping ramen before, but simply assumed the owners must have thought it to be an amusing nickname to whatever ramen it covered. All I wanted was a good hot soup and the ingredients – chicken broth, spring onion, kizami nori, and chashu pork – all seemed legit.

but it wasn’t soup.

it was… dipping ramen, ramen-that-you-dip-in-the-broth. Tsukemen, they call it in Japan. aaaahhhhh. Connection made. Hum. Slight feeling of failed…

well, I might as well give it a go!

Looked at my plate. Looked at the small plastic bowl that came along with it. Opened the lid. There was the broth. The bowl was however too small for me to dip the noodles without recreating the Yosemite Falls. I had the plastic bib on, but my spilling skills are pretty notorious. Dipping was a no go. They did serve me a big spoon, so … I poured! Broth all over my noodles. Itadakimasu. That was clearly not the way to do it, and the look the waitress gave me at the end confirmed it. In any case, I got to eat, and I must say, it was good. I have never been a big ramen fan. But for some reason, today was the day and Bone Daddies exceeded my expectations (as far as it is possible to have expectations about something-that-is-similar-to-what-you-thought-you-ordered-but-didn’t). The noodles were firm, the broth flavoury, but not overly salty, the menma (bamboo shoots) added this exciting crunchy edge, while the ni-tamago (eggs) were only a tiny bit overcooked to my liking. As for the pork… THE pork. Definitely the highlight of the meal. It was as fatty as one can wish for, thinly sliced, yet retained that enjoyable consistency to chew on. All in all, a very satisfying meal.

Happy, I asked for the bill and payed £9 in total (£8 ramen + £1 service included in the bill). Too full to face the PhD kid again, I headed home. Nap time. Sugoi. 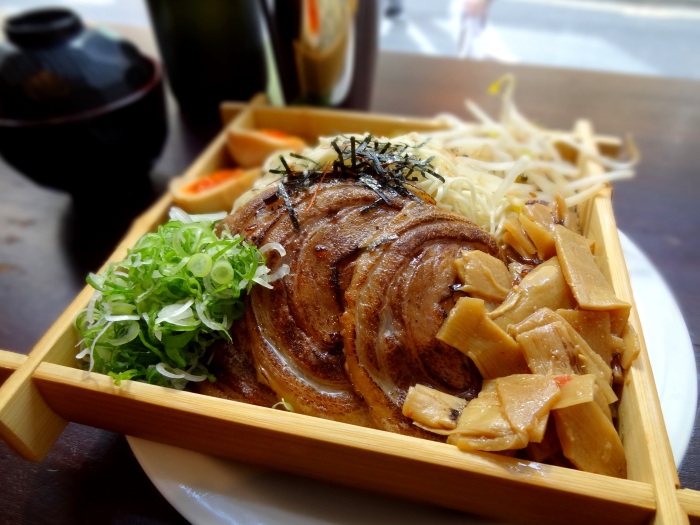 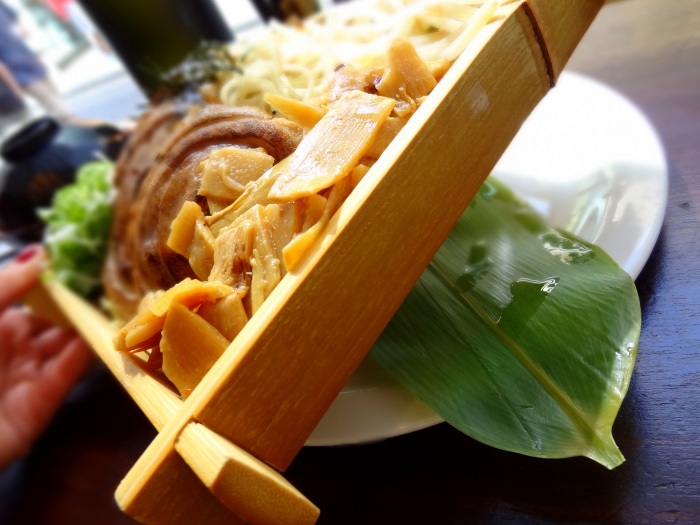 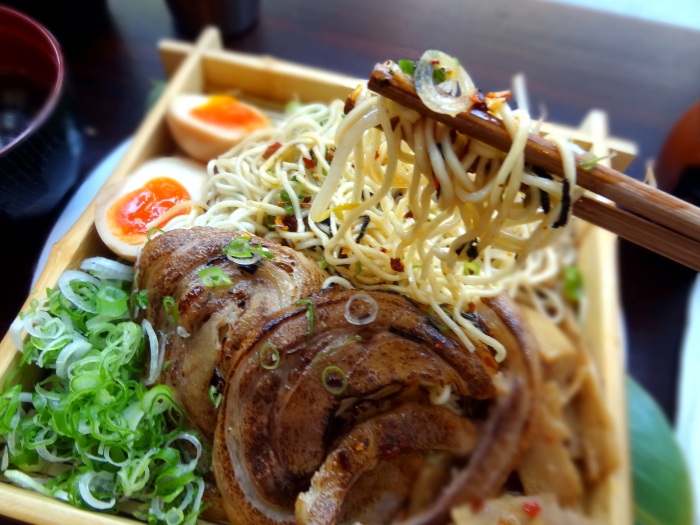